Funny thing about someone pulling their floor out from under me. My floor is still pretty damn sturdy, so I’m just standing here going “huh…well, okay.”

And now I just kinda got nothing. It could be deft compartmentalization. But really it just feels like…I dunno. Not that.

I re-prioritized my day a bit. I was gonna speed read through an online library book I’ve been wanting to read that’s due back in two days, but I had been on the fence anyway because I had other goal stuff I wanted to get done. So I breathed and centered and returned it early for the people on the waiting list. And I texted my sponsor, I guess just so I could acknowledge that something did happen even if currently I’m okay.

Now I’m gonna get back to my day. Because time ticks on and all the stuff has to get done whether people make un-ideal choices or not.

I had started my day excited that it felt like a new start of healthiness and healing.

I made Brussels sprouts even! 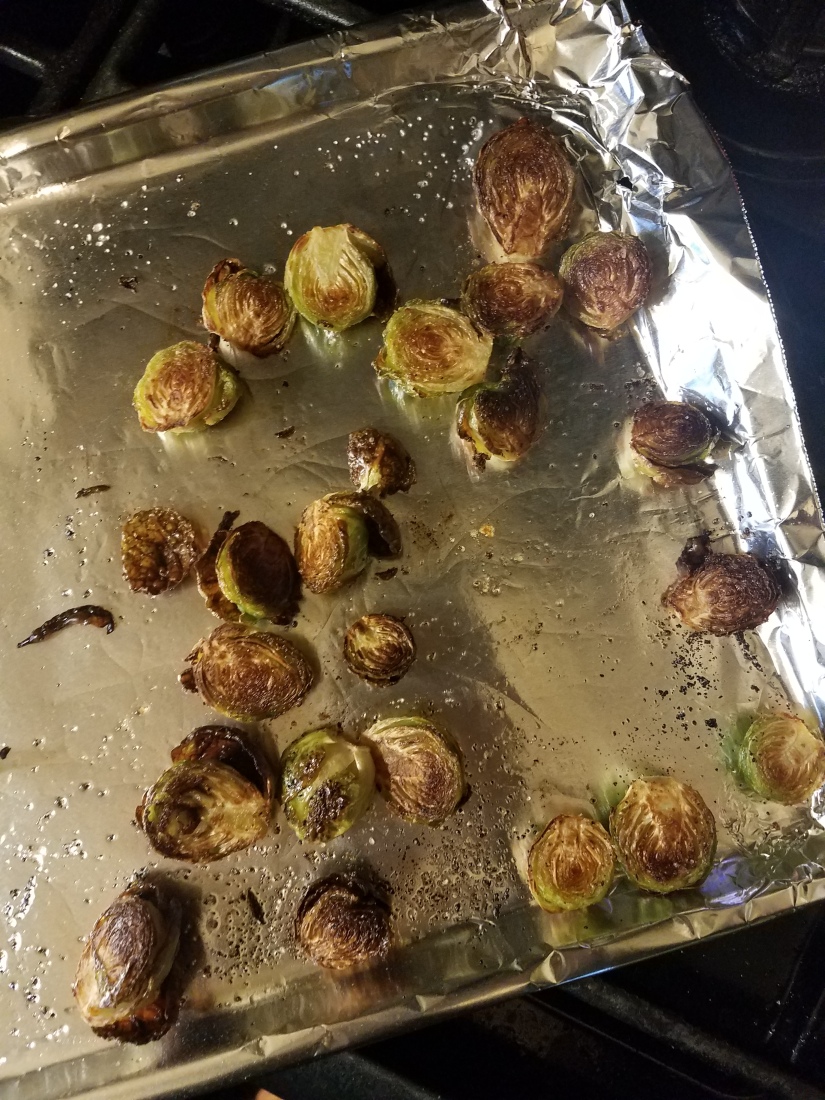 Oh, but did my body (mind?) have other plans!

Like, truly. And I want to turn it off. But it’s not a switch. It’s a weight. And I really just don’t have the means to push it off or shrug.

All I can do is write.

And of course it didn’t occur to me before the ice cream bar at 9am to write. Or the cake at 9:45. It was only at 10:30 when the sugar high made my head swim and I realized I should make some protein that I remembered writing is the shrug. I need the accountability. But now I still have to eat this despite not being hungry because fuck, the swimming.

But then I will sit down. And I won’t eat more. And I won’t self-medicate–I’ll only self-care. And maybe cry some because it hurts a lot, and then I will sleep. I need to oxygen mask myself today, even if just for a little while.

I’m having a moment where I’m trying to remember all our lasts. In case you don’t come back. In case the devastation of that undoes me so irrevocably that I can’t recall a single thing about today. Or yesterday.

I slept on you this morning. It was the best half hour of sleep I’ve had in months and I don’t think I ever actually slept. You kissed me and called me beautiful when I got home from my walk. I don’t want to remember that last tho…because it wasn’t you anymore.

We kissed last night. It felt like you. A glimpse of you between the drinks.

I’m trying to find the hope and the light, but it is currently too far to reach.

Your life doesn’t mean anything to you in this moment and I am now standing here, the girl who doesn’t know which story will be hers. Will I be the girl who loses you forever come morning? Will I be able to honor the me in another universe who got to keep you when I didn’t get to? Is there another me in some other universe who has already gotten the call?

I’ve never been this sick with worry and fear. They say that to keep going, you just have to put one foot in front of the other. I’m doing that, but all I can manage is pacing circles.

I’m not going to eat tonight. I’m so tired from making decisions I shouldn’t have been making. I’m so exhausted I could cry.

I’m so exhausted I didn’t realize I was already crying.

Not much is harder than watching someone you love have the hardest week of their life. He is hurting so much. The medication was tearing him apart while he was on it, but now that he’s stopped taking it, it’s a whole different war. He is so fucking strong to detox this out of his system. So brave. And even still, I see him feeling like he’s losing the fight.

He looks at me and he makes the face of my husband, smiling as if to connect and soothe me. But I don’t feel connected. I don’t feel soothed.

Today, on day seven, he said he was thinking of throwing in the towel. Because it’s so bad and because it’s still so bad, days after he thought he’d be on the upswing. And because there’s only so much a body can take and he has far surpassed that point.

And maybe it’s selfish of me, but damn, if he could just endure another couple days. They say the worst is over after seven to ten days. He could be on the other side of this! And then no more waiting weeks, months, years to be off it again.

But still. To have to look at him today and be completely helpless in providing any real relief–and probably making it even worse to flat out tell him “Don’t do it. Don’t give up.” It hurts. It hurts like dying inside. And I don’t even know if I’m right. There is no guarantee he’ll be over the hump by day ten. I can say I have enough faith for the both of us. But it doesn’t stop any of it from hurting so damn much.

I love this blog. I often think of it ridiculously fondly and I’m just so glad it exists.

I also love my daughter’s boyfriend. He feels like a genuinely nice boy. More on that when I’m better slept.

It’s 11pm now. I’m out of decision juice. I’ve been out of it for a good long time. In fact, I’m pretty sure I started the day out of it. I didn’t sleep enough and that skewed my everything. Chris stopped taking an addictive (and no longer necessary) medication on Friday. His morning dose was the last one and this three year battle is finally coming to an end. It’s going to change so many things for the better and I couldn’t be more proud of him.

The side effects are terrible tho and will continue to be for a little while. Far less terrible than the damage of being on the drug. I’m so happy for him and relieved and…cautious. Especially because of his seizure disorder. So we’ve taken it one minute at a time this weekend. It also meant I was up til 3am this morning, and the dog woke me to play at 7:30. And now it’s 11 and I’m still up.

All that is to say that I didn’t have the energy to stop making decisions today. (Counterintuitive much?) Decisions that go against my greatest good. I kept consciously making decisions that went against what my brain was telling me to do. There were good moments too. Practicing moments. Where I didn’t decide and just let all the things be. I reminded myself I had nothing to decide. And for that I’m extremely proud of myself. Tomorrow is another day. And I feel good about it. But first, so much sleep.

I’m lying here next to my husband and it’s almost 2am. In the trick of the dim light, he looks like someone I only half recognize. Which is an interesting metaphor for everything else.

My brain can’t wrap around the fact that he drank. I saw him a couple times before he got sober–before we met–, but I didn’t know him. I noticed him while he was detoxing, but didn’t know him then either. No, the Chris I knew was the sunbeam who walked around making everything brighter. And he’d probably argue it was all me. He’d probably say his sunshine came from my existence.

I dunno about all that.

What I do know is that I’m not going anywhere. And that’s all I need to know right now.

I know I’m in “get ready for vacation” mode, and that’s probably all it is, but the joy of purging and cleaning and being productive toward the goals I’ve been working toward for months has turned to mist before my eyes. It feels like, in this moment, the life has been sucked out of me.

I’m still go go go because I’m getting the house ready and packing and doing last minute things. But it’s all for a very specific, short term goal. And that seems easy. But the thought of working for a goal that is long term feels…nauseating.

I’m certain this will pass. I’m certain it’s nothing to even worry about. I just needed to acknowledge it. Because it felt healthier than pretending it wasn’t there.