What a difference a year (or six) can make.

The last two weeks have been one crazy thing after another. My insurance is no longer accepting my doctor and physical therapist, so I either have to change insurance or change doctors. The $673 radiologist bill I should have never gotten, that I had fixed and was taken care of in November, suddenly appeared again and hadn’t been resolved afterall. I spent an hour and a half on phone calls getting it resolved again. (Shout out to Tamika who was my own personal savior.)

I’ve been trying to get ahold of a doggie day care place so Harley can run around and play with other pups because ohmygoodness is she in anxiety overdrive/bordering aggressive because she just wants to play play play and has no outlet. (I finally heard back today! Woo!) I ran with her on Sunday (ohmygod ohmygod ohmygod!! I ran! Two laps around the house!!! Freakin’ AMAZING!!!) and then promptly fell on my right knee and palm (and elbow and shoulder). Bright side: I hurt myself, but didn’t injure anything. Less than bright side holy oww and recovery time. (Bonus bright side: I tried Chris’s ghost pepper sauce and I’m a fucking rockstar!)

At 1am today instead of seeing Chris’s paycheck in the account, there was a $900+ fraudulent charge, just in time for me to pay the $150 medical bills today. Kitten’s first vet visit…wait….she has worms?… Oh, our dog’s been eating her poop when we’re not looking?…oh….well…that’s..special…

Have I even mentioned yet we adopted a kitten?! Meet Hazel. R’s early Christmas present/our new family member. 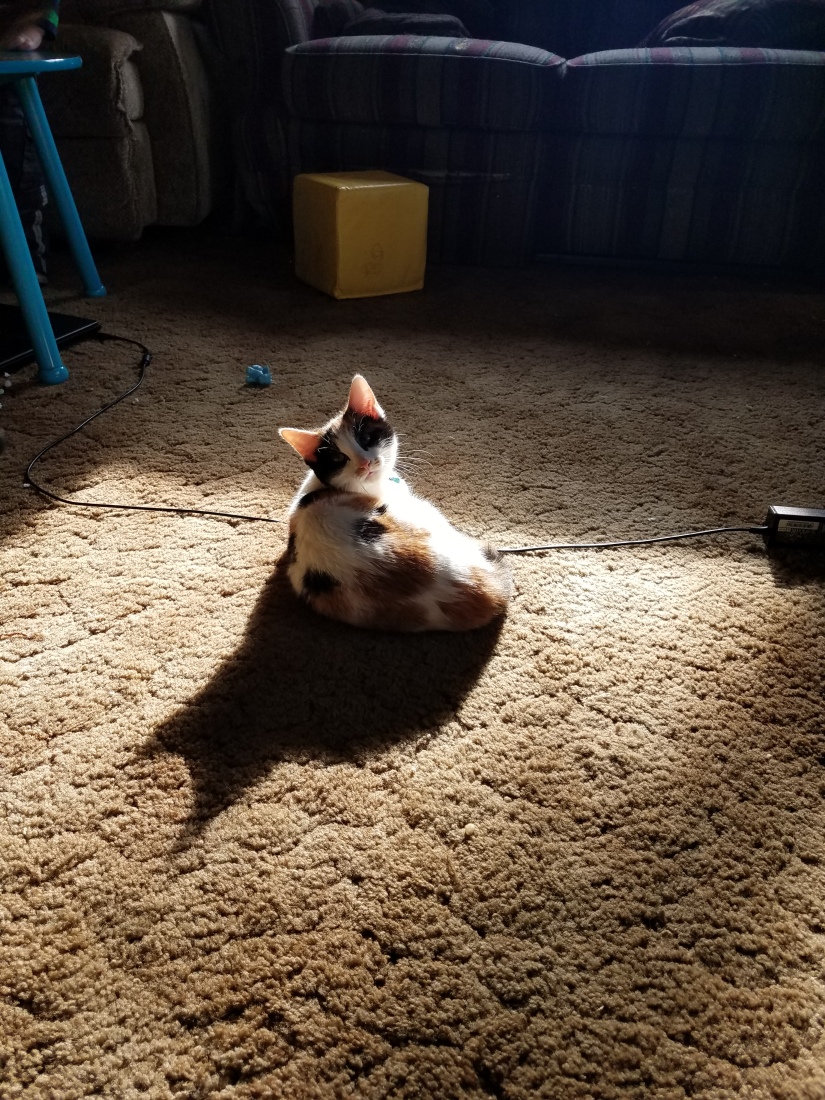 And I paid the $4.60 on my daughter’s dentist account….that they were going to send me to collections for. Ha. And I was allowed to pay on (instead of pay off) another bill. Thank god. Bright side to all of it: the deposited paycheck offset the $700 overdraft and we’re blessed to have family who can help out until the bank refunds the locked charges.

R has midterms next week and is underslept and overstressed and navigating big adult problems while still being in a teenager’s body with a teenager’s brain. (Given the option to ignore the warning signs of a close friend or make the hard call to betray confidence in order to keep him alive,  she chose life and I couldn’t be more proud.) And S is navigating the end of the semester and a week of unprecedented homework he just hasn’t been able to keep up with, especially when his parents have been a bit m.i.a. in the evenings when it’s time to work on homework because of appointments and meetings. (Given the option this morning of staying home today to work on everything or go to school and own up to the consequences, he chose to go and I’m so freaking proud of him.) And L is still recovering from being sick last week and a bleeding diaper rash to boot because he’s been eating butternut squash soup for days and apparently he’s allergic. (This morning he slept in his own bed til after 5am. Whether fluke or trend, I’m so proud of him.)

Have I worn you out yet? ‘Cause I haven’t run out of material. I could keep going. I won’t tho. Because the only point I wanted to make is that I’m still standing. I didn’t even have to stand back up from this shit show because it hasn’t even knocked me down.

What a difference a year makes.